I wrote in an earlier post that one of my favorite swords is the British pattern 1803 infantry officer's sword.  Even though my collecting interests have evolved away from British swords for the time being, the 1803 still catches my eye.

The 1803 is immediately recognized by its lionshead pommel and the cypher of King George III incorporated into the guard.   The combination if the two, in my opinion, are a perfect balance of elegance and patriotism.   While initially to be used by grenadier and light infantry units, it's appealing look made the 1803 popular with many British officers. 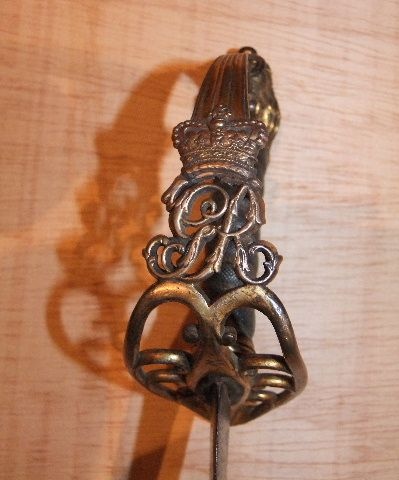 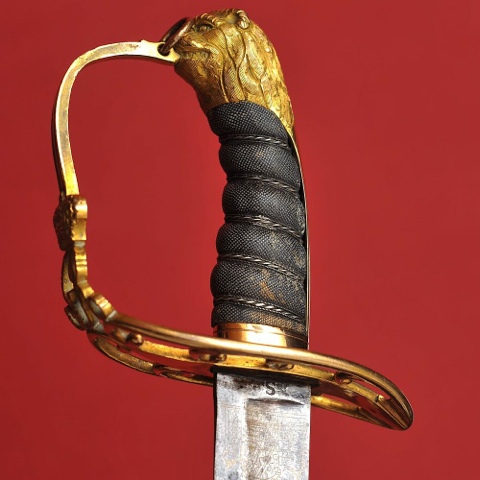 Guards are typically gilded brass. Grips are found in ray skin (also known as shagreen) leather, ivory, bone and polished wood  most often accompanied with several twists of fine wire.  The blades range from slightly to ridiculously curved and from very stout and serviceable to useless except for swatting daisies.   As with all officer's swords of the 18th and 19th centuries, the 1803 is as ornate as the officer could afford.  Blades are found plain, etched and in vibrant blue and gilt.

Scabbards are typically leather with decorative hardware.  Many 1803 scabbards provide for two suspension systems.  A frog button may be found affixed to the locket (the topmost piece of hardware) allowing the sword to be worn from an over the shoulder carrying strap with a frog fitting over the locket.  Also found are hanging rings attached to the locket and the middle band do that the sword may be worn from a waist belt or an over the shoulder strap with smaller straps descending to the sword.  Based upon uniform patterns and drawings, I believe that the more popular way to wear the 1803 was from a waist belt or shoulder belt with descending straps. 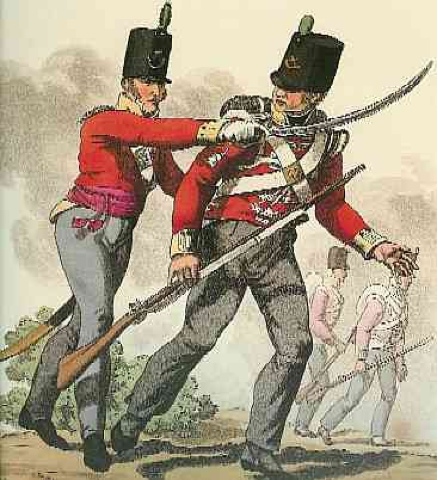 For the collector, the 1803 provides a diverse range of examples to purchase.   The pattern is general and there is much interpretation to be found. Light infantry, grenadier, Scottish or other regimental variations as well as the  branch of service (there are naval examples) variations may be found with devices such as the stringed bugle, flaming grenade, thistle  and rose or  regimental numerals and devices incorporated into the guard.

Variations of the pattern also exist due to regimental preference or manufacturer. There are regimental 1803s that deviate to the point if looking almost like  a completely different pattern. Some lionshead   pommels look like tame, odd shaped dogs.  Others resemble ferocious beasts.  Based upon manufacturer and quality, the composition of guards is  found to range from very substantial to cheaply thin and the quality of the decoration elaborate the amateurish.   A collector could devote his or her whole collection to the 1803.  When I was actively collecting British swords, I had three 1803s in my collection at one time with no two looking alike except for the general pattern.
I have noticed that prices for the 1803 have dramatically risen over the past 10 years.  Also, a number of reproductions have appeared on the market.  The quality and condition of the sword matter greatly.  Expect to pay into the thousands for complete examples with an extensive amount if gilding and blue and gilt remaining.  Variations that are regimental, light infantry or grenadier are highly prized. If looking for a more economical example, the buyer should target those that are maker marked.  As with most British officer's swords of the period, maker or retailer information is often found on the blade's ricasso or spine the inboard panel of the scabbards locket.  Some cutlets inscribed their blades "warranted" meaning that the blade is guaranteed to not break.  I wonder if anyone ever asserted a claim against a cutler  for breach of warranty.
The 1803 will always hold a special place with me.  My first Napoleonic sword was an 1803.  It had a slightly curved, pipe backed  (a rod incorporated to the blade's spine intended to increase strength) fighting blade. The guard had a substantial amount of gilding remaining with all of the leather wrap and wire present.  The etched  blade had approximately 25% of the blue and gilt still present.  Based upon the form of the royal coat of arms etched on the blade, I could date the sword to the Napoleonic era (the 1803 was carried as an official pattern for several years after the Napoleonic Wars).  It's black leather scabbard was complete and in very good shape with some minor crazing (cracking of the finish) with all of the hardware present. The locket bore the name of the retailer, but time and wear had rendered it too faint to read despite my best  efforts.
As time passed, so did my collecting interests. I made a decision to move from Napoleonic swords into 18th century blades.  As a result, I sold off many if my Napoleonic swords to be pay the much higher prices of the 18th century short sabres and cavalry baskethilts that I was collecting.  A sword collecting friend from England contacted me and inquired into purchasing this 1803.  We agreed upon a price and I shipped the sword to him.  It normally takes a week to ten days for a package that size to make the transatlantic journey.  After a few weeks, my friend emailed and notified me that he had not received the sword.  We debated upon what to do and agreed to give it a bit more time. More weeks passed and the sword still had not arrived.  Three months after I shipped the sword, right as  I was on the verge of submitting a claim for the loss, I received a phone call from my friend.  We had never spoken in person.  I'll never forgot him saying that the sword finally arrived. The box was battered and had been rifled through, but the sword was fine.  It had been held up by British customs for two and one half months. He said that he figured that the news of the sword's final arrival merited a transatlantic phone call.  He was right.
Posted by Unknown at 9:59 AM